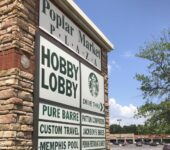 The first was the purchase of an Applebee’s in Millington, which will be taken over by Olympic Pizza. Mack Browder of Crye-Leike represented Olympic Pizza in the deal and Dustin Jones of The Shopping Center Group represented the seller.

Deal two was in a new development at the corner of Airline Road and Milton Wilson Boulevard in Arlington. Magnolia Nails signed a lease at the property marking the building’s first tenant. Jaime Henson of Crye-Leike represented Magnolia Nails and Jones represented the developers.

Finally, the family-owned business Muddy Paws — a grooming and pet supplies retailer — will set up shop at the Poplar Market Place in Collierville. Jones and Shawn Massey — also a broker with The Shopping Center Group — represented the landlord in the deal.

“It’s been kind of bleak for six weeks and it’s starting to heat back up,” Jones said of the real estate market.