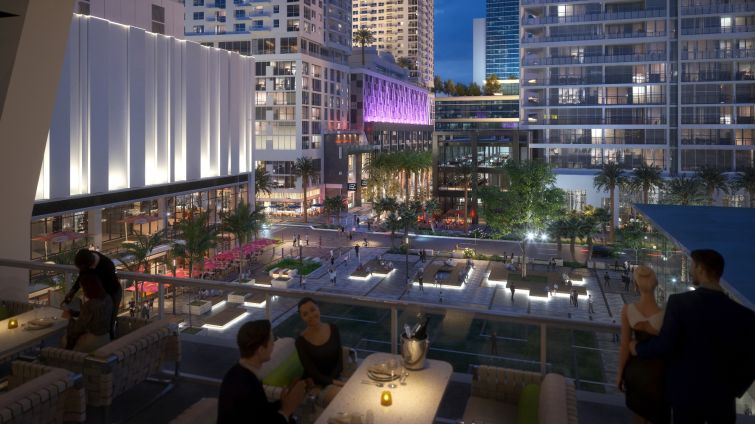 The retail component of Miami Worldcenter, the megadevelopment in the heart of Downtown Miami, is now 75 percent leased after signing a new round of leases totaling 45,000 square feet, the project’s master developers announced.

In the biggest deal, high-end fitness concept Club Studio inked a 10-year lease for 35,363 square feet along the project’s main pedestrian paseo, between Eighth and Ninth streets, according to filings with Miami-Dade County. The deal includes four five-year extensions.

The studios — a concept from L.A.’s Fitness parent company — typically offer exercise classes, a gym and a spa, making it a competitor to luxury gym chain Equinox.

The chain, which skews toward the upper echelon of dining experiences, offering $59 rib-eye steak with truffle butter, has 68 locations nationwide, including one in Dadeland.

Leap, a New York-based startup that operates stores typically for e-commerce-heavy, direct-to-consumer brands, inked a 1,246-square-foot lease at the base of the Paramount condo tower, which Royal Palm Companies’ Dan Kodsi, Art Falcone and Nitin Motwani completed in 2019.

Luli Fama, a Miami-based luxury swimwear brand, will occupy Leap’s storefront as part of a five-year deal between the startup and clothing brand. The store, which marks Leap’s 15th deal in South Florida, will likely open next spring, said Comrass Company’s Karen Maerovitz, who represented the tenant.

The other tenants are expected to open either before year’s end or in 2023, according to a spokesperson for Miami Worldcenter.

At the Paramount tower, Luli Fama will join Rihanna’s lingerie brand Savage X Fenty and Posman Books, which are set to open next year.

Miami Worldcenter, a 10-block development where some of the country’s biggest developers are erecting towers, is set to include 300,000 square feet of retail space, of which about 255,000 square feet has already been completed.