Back
by MAYA SMITH

Once the site of a department store, a near-20-acre lot on Hollywood has sat vacant and blighted for over two decades. Now, Frayser Gateway, a grocery-anchored shopping center — the area’s first project of its kind in the past 30 years — is in the works to transform the space.

In addition to a proposed 35,000-square-foot grocery store, Frayser Gateway will host other retail establishments, restaurants, and a hotel.

Total investment in the shopping center would equal a little over $16 million, with construction set to begin in 2018 and wrapping up sometime in 2020.

Known for his work on the retail side of the new Crosstown Concourse and the Binghampton Gateway development, Shawn Massey with the Shopping Center Group is working in collaboration with G2 Ventures, the group that currently owns the property, to develop the 97,000-square-foot space. 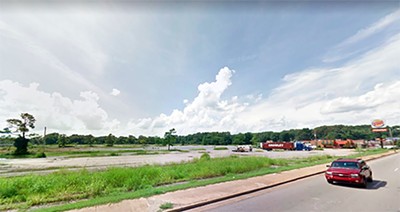 Massey says one of the goals of the project is to eliminate the huge source of blight that the abandoned lot, now used as a dumping ground and illegal parking lot for 18-wheelers, has created.

“It sets a bad example for what the Frayser community is perceived as and not really what exists in the community today,” Massey said.

Another goal of the development is to address long-term poverty in Frayser by bringing economic development to the area, while providing access to food and jobs to the surrounding residents.

Introducing a grocery store to the area would provide relief to neighborhoods near the proposed project, which are certified USDA food deserts, with transportation-challenged residents lacking access to healthy foods.

Additionally, Frayser Gateway is expected to bring the equivalent of 136 part-time jobs with an average annual wage of $24,294 to South Frayser, which currently has unemployment rates between 15 and 30 percent.

Leaders in the Frayser community welcome the new shopping center, acknowledging the neighborhood’s need for more businesses and avenues of revenue.

“The Frayser Gateway project would be a much needed shot in the arm for the community,” said Steve Lockwood, executive director of the Frayser Community Development Corporation. “I believe it could spur other developments in Frayser, particularly in the nearby Watkins gateway area.”

The Frayser Gateway project is made possible by a 15-year Community Builder pay-in-lieu-of-taxes (PILOT) incentive awarded to the group by the Economic Development Growth Engine for Memphis and Shelby County (EDGE) last week.

EDGE board chairman Al Bright Jr. said the shopping center will prove to bring economic growth to Frayser and put money back into the community, as the Frayser Gateway group is expected to produce a little over $100,000 in taxes during the PILOT and over $400,000 post-PILOT.

The incentive gives the group a temporary abatement of taxes in return for spending $3.2 million of construction-related costs with city or county-certified minority or women-owned enterprises (MWBE).

Previously, terms of the PILOT required contracting only with locally owned small businesses, but after the EDGE board voted to amend its local participation policy last week, PILOT recipients must spend 25 percent of spending to contract with MWBE.