The new store at Sixth Avenue between 41st and 42nd streets would appeal to office workers and tourists grabbing lunch to sit in nearby Bryant Park and commuters picking up groceries on their way home. 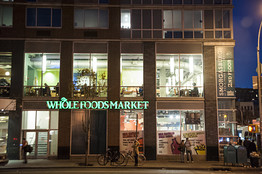 Whole Foods cafe on Bowery Street is filled with customers studying and eating dinner in December 2012. Jason Andrew for The Wall Street Journal

Retail brokers not involved in the deal said they expect the store’s selection to be geared more toward prepared foods.

Whole Foods, which was represented by SCG Retail in a number of recent deals, will have eight markets operating in the city as of Tuesday, when a new store in Gowanus is set to open. With four stores in development in Harlem, the Upper East Side, Williamsburg and Bryant Park, the chain plans to increase its presence in the city by 50%.

The building for the Bryant Park store, 1095 Sixth Ave., is owned by a Blackstone Group fund, as part of the Equity Office portfolio it purchased in 2007. Blackstone reconfigured the space, shifting the location of a subway entrance toward Sixth Avenue and replacing that with a two-story retail addition.

While a Whole Foods in the heart of Midtown is unlikely to transform the area as dramatically as one opening in edgier neighborhoods such as Gowanus and the Lower East Side, brokers nonetheless said they expect it to give a big boost to the retail and restaurant options that line the park.

Brokers say the 1095 Sixth Ave. space has proved challenging to fill, with rumored tenants including everything from sporting-goods to discount-clothing stores.

Daniel Biederman, president of the Bryant Park Management Corp., said he welcomes the addition—and isn’t worried it will compete with the concessions that help generate revenue for the park.

“It’s fantastic. Whole Foods coming into a neighborhood can never be bad,” he said.

People enjoying Bryant Park on a chilly winter afternoon were split on whether they would shop at the new store.

“It has much better food choice. I’m tired of only the little delis around here,” said Melissa Aybar, a 25-year-old fashion designer who works on 37th Street.

But others said it was too pricey and far from where they live to be appealing. “Normally I just buy at a regular supermarket. It’s closer to my home,” said Giselle Lojano, a 21-year-old who works in a retail tent in Bryant Park market and lives in Corona, Queens.

—Joe Jackson contributed to this article.