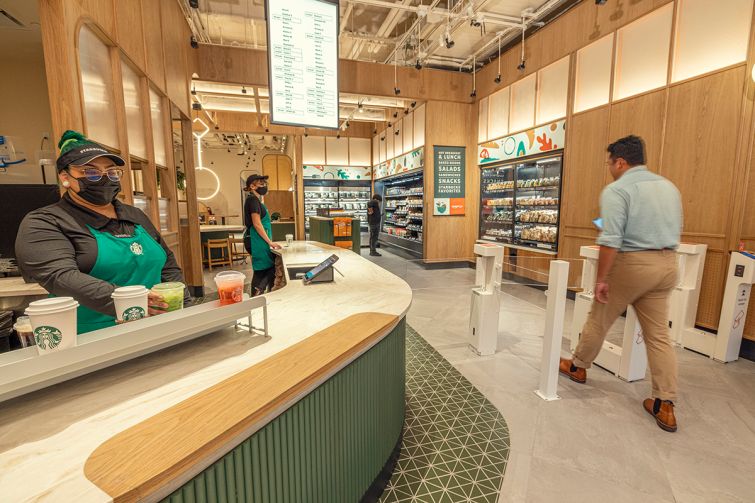 Six months after Starbucks and Amazon opened the first cashier-less Starbucks Pickup with Amazon Go on East 59th Street, the partners will open a second one in May, Commercial Observer has learned.

Starbucks and Amazon will unveil their new 3,100-square-foot store slated for May 20 in the old Dean & DeLuca space at the base of the 52-story New York Times Building at 620 Eighth Avenue, between West 40th and West 41st streets, a source with knowledge of the deal said. It will operate similarly to the one that opened last November at 111 East 59th Street, between Lexington and Park avenues. The new stores use Amazon’s checkout system that ditches cashiers and instead uses scales, cameras and sensors to charge customers.

The new store concept “integrates the digital and physical retail experience, bringing together the connection and comfort of a Starbucks cafe and convenience of Amazon Go’s Just Walk Out shopping experience,” the companies tout. Amazon and Starbucks plan to open a third location together, but have not announced the location.

Starbucks signed a 10-year lease for the ground floor of Brookfield Properties New York Times office tower at the beginning of the year, when the asking rent was $225 a square foot. Subsequently, Amazon signed a sublease with the coffee giant for about half the space.

“It’s a really nice space,” the source said. “It’s right at the subway. It’ll do well.”

SCG Retail’s David Firestein represented Starbucks in the transaction. He declined to comment. Jason Maurer of Brookfield, who represented the landlord in the deal, didn’t immediately respond to a request for comment, nor did a representative for Amazon.

A spokesperson for Starbucks would only confirm that the new location will open this year.