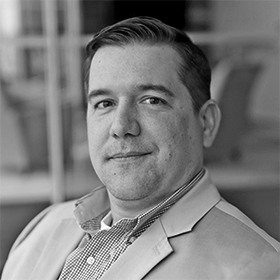 Bryan Chandler was born in Illinois but spent many of his formative years in Mississippi where he gained an appreciation for the outdoors.   Following in his father’s footsteps, Bryan worked for over a decade as a Retail Store Manager throughout the southeast for retailers such as Party City, Linens-N-Things, and Kmart.  After deciding to pursue a new career in GIS, Bryan joined the corporate GIS Management Team where he has provided support and forward-thinking for the past six years including most recently as Director of GIS-Infrastructure. Bryan holds a Bachelor of Science in Geographic Information Science from Kennesaw State University, a Master of Science in Geographic Information Science & Web Map Programming from the University of Wisconsin-Madison, and is completing a graduate certificate in Data Analytics from the University of Chicago.

Bryan loves to spend his free time with his wife, Daniella, and their daughter, Emma Lucia, enjoying the outdoors by land or water, enjoying a good meal with friends, searching out the best beer that Atlanta has to offer, and traveling anywhere with a good beach.  Go Badgers!