Mr. Latone, 51, is the president and co-chief executive of the Shopping Center Group, a company based in Atlanta that serves as a consultant and adviser to property owners and retailers. 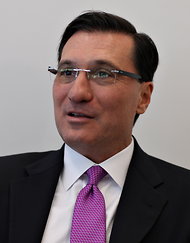 Interview conducted and condensed by

Q. The recent merger with Northwest Atlantic provides a foothold in the New York area.

A. It has given us the opportunity to go beyond being a firm that’s operating in the mid-Atlantic and Southeast but now really operating in the eastern United States. As part of that acquisition we also opened up an office in Manhattan — at 60th and Broadway.

A. From a branding perspective we felt that New York, particularly Manhattan, is rather unique as it relates to retail real estate and so we couldn’t use the name the Shopping Center Group. You don’t really have shopping centers here — it’s street-front retail. We’re using a subbrand to operate in the city.

Q. So how much of the company’s operations are now based in the New York area?

A. Today as a company about 15 percent of our business is in the New York area; about half of that is in Manhattan.

Q. Are you working on any deals or projects that you can talk about?

A. Well, unfortunately as a result of confidentiality agreements that we’ve got with all these clients we can’t talk about anything that’s not open or announced.

But probably the most recent involves Whole Foods, which is about to open on the Upper East Side in 36,000 square feet of space. I can’t describe specifics of the transaction itself.

Q. In cities like New York retailers are using more vertical space. Is this harder to lease?

A. You’ll see multilevel retail in New York and Miami, and it works.

It is, though, much more difficult to lease, because obviously on the first floor you’ve got the pedestrian traffic or the vehicular traffic. You lack the visibility and sometimes it’s much more difficult to get to the space. And so as a result of that, we do see rent levels that drop off substantially as you start to go up in floors.

Q. Are there any new trends in retail leasing?

A. We went through an era — probably up until the mid-2000s — when bigger was better, meaning that the size of retail stores kept growing very significantly. What we’re seeing now is that store sizes have started to shrink, particularly as they relate to those retailers that are very susceptible to the Internet. So those retailers are looking at more of a situation where the store becomes the customer interface, if you will, and then through multichanneling they could get the product to the consumer in a variety of ways.

I suspect that what we’ll see moving forward is three basic trends. A lot of brands will start to move toward private-label merchandise. They will focus on controlling the supply chain from conception of the products to getting it on the shelves in the store. Last, I think the consumer is much more focused on value than on price and one of the instances of value is customer service. Those retailers that invest in their store employees can really provide an experience to the consumer when they visit a bricks-and-mortar location.

Q. What is the average size of retail space being leased these days?

A. It really depends upon the merchandising category. By way of example, if you look at office supplies, office supply locations, on average five years ago, were probably 30,000 to 35,000 square feet. Today they’re around 18,000 to 24,000 square feet. From an office-supply perspective you can order online and have it shipped to the office.

A. There is not a significant change in lease terms. National anchors typically are in the 10- to 20-year range, and smaller locals are typically five-year terms. But one thing we are seeing is that the lending community — because it’s gotten burned in past years — actually have some control over certain lease terms on anchor tenants.

Q. How is your business over all?

Because of the areas that we operate in, certainly the New York metro area, there’s been very little construction. Demand for space is actually very good.

Q. Any predictions for the holiday shopping season?

A. The consumer is really skittish right now: we’re dealing in an election year that creates a lot of uncertainty. If we can remove uncertainty from the consumer, and we see better jobs reports, certainly that’ll improve the consumer mood.

A. I love to shop, and fortunately I’m married to a woman who loves to shop as much as or more than I do.

A version of this interview appeared in print on September 12, 2012, on page B11 of the New York edition with the headline: Samuel P. Latone II.