For the shopping mall – that quintessential staple of American retail, the biggest of big boxes, a sprawling, multilevel marvel of commercial magnificence – these are most certainly interesting times.

As Amazon continues securing its vise grip on the psyche of consumers who’ve adjusted their spending habits around a few keyboard clicks or screen taps and fast delivery straight to their door; as major mall anchors like Macy’s, J.C. Penney and Sears have shuttered hundreds of stores since 2013; as screens and digital devices swallow more time and attention out of our day than ever before, what place is there even for a brick-and-mortar amalgam of shops when Amazon is essentially a mall in your pocket? 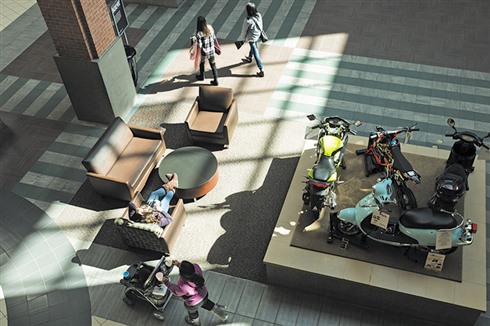 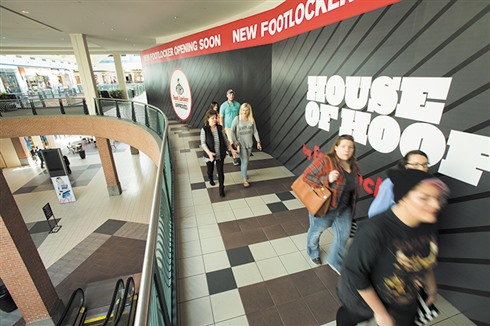 Unlike years ago, the common areas at Wolfchase have several kiosks where all kinds of products are sold. (Memphis News/Andrew J. Breig)

Is there even a place for such a physical mall anymore?

Perhaps. For 20 years – going all the way back to 1997 when “Buffy the Vampire Slayer” debuted on TV and Microsoft was the world’s most valuable company – Wolfchase Galleria has occupied a signature place in Memphis’ commercial landscape.

The city, and the world, has obviously since changed around it. But that’s the thing about bricks and mortar – the physical edifice, and much of the core operation inside it, endures.

So this milestone anniversary year for the roughly 130-tenant, more than 1 million-square-foot Simon Property Group-owned shopping center represents a good reminder: Notwithstanding the headlines that for years have portended the obituary of the traditional shopping mall, Wolfchase has spent two decades now finding a place of its own.

The trick, of course, is maintaining it.

Forbes notes that department stores, which serve as mall anchors, have seen sales per square foot drop by 24 percent over the past decade, according to real estate consulting firm Green Street Advisors. Green Street Advisors also found that 100 mall properties in the U.S. comprise 44 percent of the total value of U.S. malls, again per Forbes. Nine hundred mall properties comprise the rest.

Wolfchase is something of an outlier. Walking the length of the property inside can still be something of an assault on the senses, even today. Patrons pass delighted children whirling around the carousel; food court workers hawk samples carnival barker-style; a sign announcing a revamped Malco cinema coming soon; kiosks peddling cell phone cases and sunglasses; digital signage; massage chairs; the yips of children scampering around a play area; the Starbucks line; the giant “Coming Soon” sign announcing a Foot Locker where a music and entertainment store once operated; and dozens of other shops, kiosks and assorted sights and sounds.

There are also amenities and various touches, not all of which are necessarily core to a traditional mall-shopping experience. Kiosks hawking almost anything – one is a seemingly busy T-shirt-making operation – occupy space at regular intervals across the length of the mall. Children are whisked around the mall in a multi-car train driven by a “conductor” while parents shop. There’s a convenience store inside one mall entrance and charging stations for digital devices inside.

Wolfchase director of marketing Arianne Cousin says the mall welcomes about 10 million visitors a year and draws shoppers from across Memphis and Tennessee, as well as nearby states like Arkansas and Mississippi. 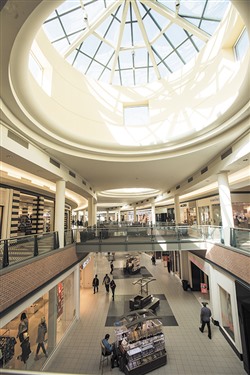 Wolfchase Mall has survived in an increasingly e-commerce shopping world.

“The shopping experience is about more than just going into a store and picking out a shirt or a great pair of shoes,” she says. “If you kind of think about it, sometimes you just want to look for an outlet and escape to get out of the house or away from your desk. Maybe pop into the mall for a dining option or to talk and socialize for some me-time. I know a lot of busy moms appreciate that.

“The instant gratification thing is big. Certainly, if you need something for a night out or date night or something like that and it’s Friday at noon, there’s no way you can get that merchandise shipped to you in an instant. Even overnight shipping is pretty high.”

And so it’s to the mall, not a digital device, a harried shopper might turn.

As Shawn Massey of The Shopping Center Group likewise sees it, the mall has lots more going for it than against it.

He dismisses the shopping mall naysayers as misunderstanding the nature of the game. Part of the strength that high-end malls like Wolfchase still enjoy, he explains, is in the power of the bundle.

It’s not unlike why cable companies want to sell packages of channels and are loathe to break them up a la carte. Or why the stakeholders over at Crosstown Concourse have a mantra they use internally in reference to the collection of tenants there: “Better together.”

“All the tenants are better being part of a bigger whole,” Massey says. “We don’t talk about the Wolfchase Mall. We talk about the Wolfchase trade area around it. It’s all the retail across the street. The new Kroger on U.S. 64. The Ikea. It’s the synergy and density being created. Sure, some retailers like Sears are struggling. But that’s not a mall thing, it’s a company thing.”

Indeed, for more evidence of what that “company thing” looks like, a recent survey by YouGov BrandIndex as reported by Fortune found that consumers’ favorable impressions of Macy’s hit an eight-year low in January, with J.C. Penney and Kohl’s earning similarly low marks.

The shift in Wolfchase’s tenant mix has reflected, well, everything outside of its walls and also outside its control.

Music stores and bookstores have floundered across the country, which is why today shoe stores occupy spaces where both of those former operations once were housed in Wolfchase. Foot Locker, for example, is coming to the space vacated by the entertainment media store FYE.

“The middle- to bottom-end malls, those are dying off,” Massey says. “They did not evolve and change, and maybe the area around them changed, like with Hickory Ridge or Raleigh Springs.

“From our point of view, Wolfchase is still the No. 1 trade area from sales per square foot to total sales to square footage. It has very low vacancy. It is still the most dynamic trade area in Memphis – stronger than Southaven, Collierville and Germantown. It’s got millions of square feet of retail all anchored by the mall.”

Because that’s the other strength, beyond the “bundle.” A mall is also a host ocean that feeds an assortment of retail tributaries around it. It can either be a virtuous circle or vicious cycle – a strong mall draws attention from strong retailers and businesses, which feeds the mall, and they all make each other stronger.

Or a mall sees a decline as the area around it stagnates.

For Wolfchase, for now, the former appears to be the case. Massey says Wolfchase is the gleaming crown jewel at the center of a trade area extending south to Dexter Road, possibly as far as Macon Road; to Appling on the west; Canada Road on the east; and U.S. 70 to the north.

Retail pros like him also cite the opening of the state’s only Ikea nearby Wolfchase in December, and the Dave & Buster’s set to fill the Sports Authority space across Germantown Parkway.

Other encouraging signs: Malco previously said it didn’t plan to renew its lease inside Wolfchase when it ended this year. The cinema chain then changed its mind and negotiated a new lease, with renovations to its existing mall theater to include improved sound systems, upgraded auditorium seats, new restrooms, an updated lobby, enhanced concession stand with new menu items and fresh signage.

A sign posted on the doors encourages shoppers to “Look for an all-new Wolfchase Cinema to premier in Spring 2017!”

Not long after Wolfchase opened in 1997 and welcomed its first shoppers, department stores were pulling in $230 billion – in 2016, U.S. Census figures show, that was down to $155.5 billion.

A decline is a decline. But billions are still billions.

It is a complicated needle to thread, and the stakes are high. Physical retailers have their own challenges in an e-commerce-heavy world. Malls like Wolfchase need those retailers en masse.

For Wolfchase and the retailers, they have to figure out their own ways of keeping customers coming through the doors. Certainly, Wolfchase celebrating its next 20 years depends on it.