The Grove tries to fill up amid retail challenges 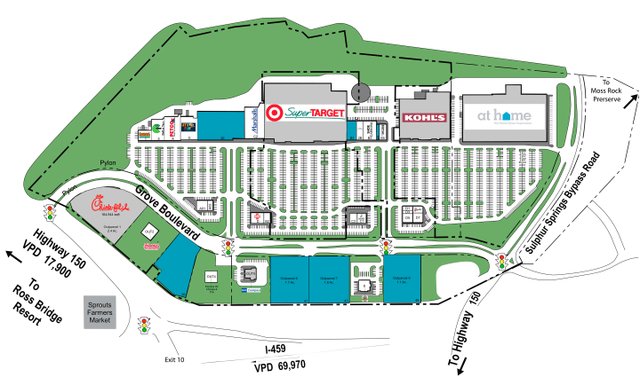 This map shows the current vacant spots in The Grove shopping center in Hoover in blue. However, Kohl’s plans to quit using 24,000 square feet of its 87,410-square-foot store, and there are several letters of intent to fill some of the vacant spots.

More changes are in store for The Grove shopping center at the intersection of Interstate 459 and John Hawkins Parkway.

Kohl’s is getting ready to downsize and quit using 24,000 square feet of its 87,410-square-foot space there, but a new craft beer store is opening in another spot and continuing a stream of new businesses to come to the 600,000-square-foot center in the past three or four years.

The Kohl’s downsizing is part of a nationwide effort by the retailer to reduce store sizes to better match demand.

It should free up enough space to make room for a “junior anchor” tenant at The Grove, said Kathy Dennis of The Shopping Center Group, who has been the leasing agent for the property until late February.

Kohl’s plans to sell a ground lease on a nearly half-acre outparcel in its parking lot, Dennis said.

Meanwhile, Hoover resident Scott Huskin is opening a craft beer marketplace called The Casual Pint in a 2,500-square-foot space next to Results Physiotherapy, in one of the outparcels in the parking lot in front of Shoe Carnival. 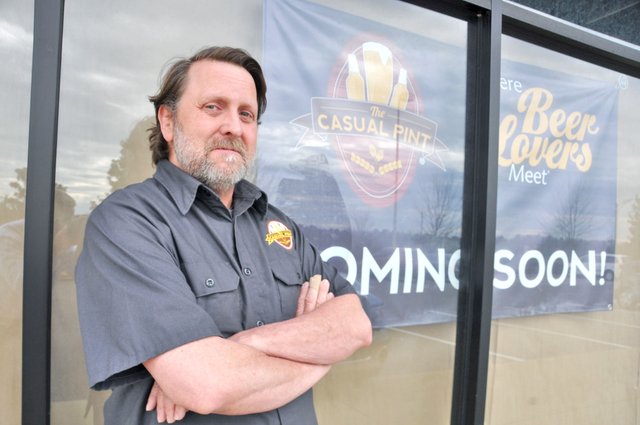 It will look much like a coffee shop, except it will sell craft beers, including growlers (glass, ceramic, plastic or stainless steel jugs), crowlers (32-ounce aluminum cans) and pick-your-own-kind variety six-packs, Huskin said.

He also plans to offer foods that complement beer, such as beer cheese, flatbreads and bratwurst, and have live entertainment, trivia nights and bingo, he said. Customers can drink and eat in the store, on a 500-square-foot patio or take their drinks and food to go. He hopes to be open by early April.

“I’ve been working on this for two years,” Huskin said. “The red tape has been crazy, but we’ve gotten through it.”

This will be the second franchise of The Casual Pint in Alabama. The first opened in Huntsville in August, Huskin said.

An Arby’s restaurant is planned along Grove Boulevard next to Express Oil Change & Tire Engineers, and Dennis said The Grove hopes to soon announce more tenants for the center.

A deal is in the works to fill a 2,000-square-foot spot next to Shoe Carnival with a weight management consulting company called Profile, and there are letters of intent to fill two of four vacant outparcels close to Interstate 459, she said. One of those is for a non-fast-food restaurant, she said.

A 7,500-square-foot space next to the SuperTarget is temporarily occupied by The Honey Baked Ham Co., but The Shopping Center Group has a letter of intent for another tenant there, Dennis said.

The space originally was supposed to be a Dress Barn, but the deal with Dress Barn fell through because the store was only committed to come if Lowe’s built in the shopping center, she said.

Lowe’s did have plans to build in The Grove when the center first was built in 2009, but the recession hit and Lowe’s never came. When the economy went south, The Grove struggled to fill up, Dennis said.

Lowe’s ended up selling its anchor spot to the At Home store, which opened in late 2014, but there still is a 50,000-square-foot hole in the shopping center between Marshall’s and Let’s Play. That space potentially could hold something larger if the tenant wanted to go multi-story, Dennis said.

Filling spots has been challenging because anchor stores such as SuperTarget, Kohl’s and Petco have restrictions in their contracts about what other types of businesses can be in the center.

Target will allow only retail stores to fill remaining vacancies in the main part of the shopping center because only a certain percentage can be office or restaurant space, she said. 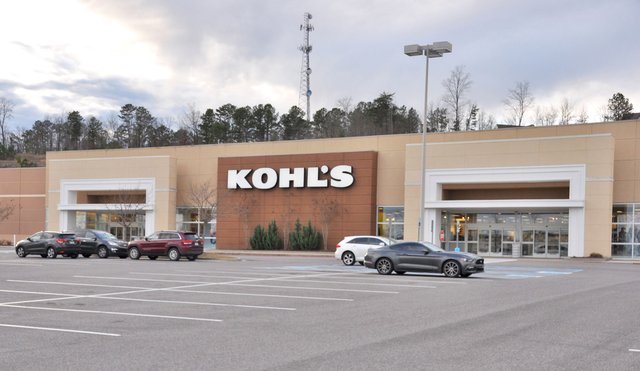 Kohl’s plans to quit using 24,000 square feet of its 87,410-square-foot store in The Grove shopping center.

Also, other tenants have exclusive rights that will not allow a competitor to come into the shopping center. For example, Chick-fil-A won’t allow another chicken restaurant, and Freddy’s Frozen Custard & Steakburgers has the right to be the only restaurant specializing in burgers, she said.

Dennis said she’s optimistic about filling up the rest of the center. Once Chick-fil-A built at the entrance, other outparcels have been leased out in a domino effect, including spots for Freddy’s, Arby’s, Express Oil Change & Tire Engineers and The Boot at The Grove. The Arby’s deal was not finalized as of late February, but the restaurant appears on the shopping center site plan.

Other new businesses that have come in since The Shopping Center Group took over leasing in 2014 include Anytime Fitness, Let’s Play and Results Physiotherapy, she said.

Last year, the New York-based Katz Properties bought The Grove shopping center from Kimco. The property remains attractive both because of its existing tenants and all the traffic driving by on I-459 and John Hawkins Parkway, Dennis said.